This article also features in The Report: Peru 2019. Read more about this report and view purchase options in our online store.

The strength of domestic agriculture relies on crop diversity, a harvest season that is the inverse of the northern hemisphere’s, and the fertile and well-irrigated coastal regions. As agricultural exports rise, they are becoming important contributors to GDP and major providers of job opportunities. By opening up to new global markets and diversifying yields, Peru is looking to lift the value of the sector and provide a stable source of foreign currency.

The value of agricultural exports rose by 12.4% in 2018 to reach $7.03bn, according to the Ministry of Agriculture and Irrigation (Ministerio de Agricultura y Riego, MINAGRI). Fresh fruits and vegetables were the main drivers of agro-exports that year; avocado shipments generated $724m, or 10.3% of the total, followed by grapes ($718m); decaffeinated raw coffee beans ($711m); blueberries ($590m); mangoes ($223m); and bananas ($166m). Performance in early 2019 continued to be positive, with exports for January reaching $670m, a 15.2% year-on-year increase, according to the Central Reserve Bank of Peru. This growth was partly explained by the 26.4% increase in volumes shipped, especially of grapes, cranberries and mangoes.

MINAGRI expects exports to continue expanding, with figures forecast to reach $8bn in 2019 and $10bn by 2021. The National Superintendency of Customs and Tax Administration estimates the value of fruit exports alone will reach $5.6bn by 2021.

In 2018 agriculture was Peru’s second-largest generator of foreign reserve currency, trailing only the mining industry. The US made up the largest destination market for Peruvian produce, with the value of agricultural goods shipped to the US reaching $2.5bn in 2018, an increase of 13% on 2017. The next three-biggest markets by export value were the Netherlands, Spain and Ecuador. In addition to support from this quartet of countries, the growth of agricultural exports has been driven by increasing demand from other foreign destinations. In August 2018 MINAGRI announced it was looking to gain access to new markets for up to 193 agricultural products. “The identification of markets for agricultural products is a job that is coordinated between MINAGRI’s National Service of Agri-Food Health and Quality and export guilds,” Gabriel Amaro, executive director of the Association of Peruvian Agrarian Producers Guilds (Asociación de Gremios Productores Agrarios del Perú, AGAP), told OBG. “For example, Peru will begin exporting passion fruit to Asia in 2019.”

The growing demand for quality produce and the rising purchasing power of Asian consumers present significant opportunities for farmers. Several citrus fruits are being considered for import in up to seven countries, according to Gustavo Mostajo, a former head of MINAGRI. “Countries in Asia are importing at most 8% of what the US imports from Peru; hence, Asia as an export destination represents high potential,” he told local media in August 2018.

In 2018 Peru ranked among the world’s top-20 fruit and vegetable producers, according to AGAP. For four consecutive years, Peru has been world’s leading quinoa producer, and in 2017 it was the top exporter of organic bananas, the second-largest exporter of asparagus and the fourth-largest of avocados. Peru is looking to position itself in the near term as one of the top-five exporters of 10 different types of produce.

Efforts to modernise farming infrastructure will be central to helping Peru achieve those goals. Of the 4.2m ha of active farm land, only 4.4% is equipped to undertake high-efficiency agricultural activities. AGAP expects the sector to receive investments totalling $3.3bn over the period 2014-23, which should help to update its technology. “We have been developing modern agro-exports for around 20 years,” Amaro told OBG. “The sky is the limit for us.” 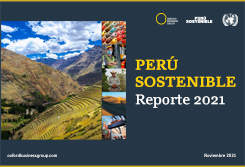