This article also features in The Report: Gabon 2012. Read more about this report and view purchase options in our online store.

The National Infrastructure Master Plan outlines a strategy to develop the infrastructure necessary for Gabon to establish itself as an emerging global economy by 2025. Gabon’s master plan was drawn up by US-based engineering, construction and management firm Bechtel, which brought its experience in national infrastructure planning to bear on structural weaknesses in the economy. Projects under the master plan will be concentrated on a number of high-priority sectors, including transport, energy and housing.

Implementation of the master plan falls to the National Agency for Public Works (Agence Nationale des Grands Travaux, ANGT), working in collaboration with Bechtel. The ANGT estimates that the implementation of the entire master plan will require CFA7.403trn (€11.10bn) in public financing between 2011 and 2025, or an average annual public investment budget of CFA493.53bn (€740.29m) over the next 15 years. This is an ambitious financing goal, but one that is not out of reach considering that 2010 public investment totalled CFA732.2bn (€1.09bn).

The ANGT conducted a review of Gabon’s infrastructure needs and developed a coordinated plan that outlines several key projects designed to have a maximum economic impact by concentrating on priority corridors with the highest concentrations of population, existing infrastructure and natural resources, and therefore the most potential for development. The agency will introduce procedures to increase site safety and ensure respect for deadlines and higher quality. A transfer of skills will be conducted by enforcement of contract conditions and on-site training.

The ANGT also aims to enforce stricter payment schedules, as payment delays from the public sector have been a persistent problem for construction and public works companies. Eduardo Cejuela Antero, general manager of Spanish construction firm Acciona in Gabon, explains, “The arrival of Bechtel and the ANGT has increased the structure of the market and should help to maintain more regular project schedules in the future. Payment delays remain a problem in the short term, but the sector outlook is positive.”

PRIVATE SECTOR: Given the ambitious agenda for infrastructure projects, international firms will have a critical role to play in terms of project financing. Gabon’s government has committed significant funds to the implementation of the National Infrastructure Master Plan’s construction projects, but payment delays cannot be expected to be resolved overnight. Therefore, international financers will be critical to meeting the proposed €15.99bn in public and private investment for infrastructure between 2011 and 2016.

Funding from global organisations such as the African Development Bank, World Bank and the French Development Agency has made the nation’s major road infrastructure projects a reality in the last three years. The Development Bank of Central African States has provided much-needed funding for the refurbishments of Gabon’s provincial airports. Both of Gabon’s special economic zones are being developed under the framework of a public-private partnership (PPP) with agricultural supply chain firm Olam. The master plan states that, “ports, airports, railway networks, roads and bridges are examples of infrastructure projects which could potentially be privatised in Gabon.” A variety of financing mechanisms, including PPPs, private developments, build-operate-transfer contracts and operating concessions, will be activated to encourage private sector involvement, creating considerable ownership possibilities for partner institutions.

While many projects are still in the early stages, and the rate of progress remains to be seen, the development of the master plan and centralisation of all ventures under the ANGT have led to coherence in the sector, maximising impact on economic development.

Focus Report: How are GRC trends evolving in West and Central Africa?

Business environments around the world are changing in response to new investor demands, moving towards tighter regulations and greater transparency. 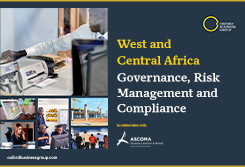 As the construction industry redefines its priorities to ensure sustainability, there is increasing recognition of the benefits of regenerative architecture as a means of lowering emissions. According to the “2019 Global Status Report for Buildings and Construction” published by the UN Environment Programme (UNEP), the construction sector accounts for nearly 40% of global energy-related greenhouse gas emissions. In light of this, a greater emphasis has been placed on sustainable architecture…