The retail landscape in Ras Al Khaimah is set for a period of expansion, renewal and rejuvenation. In 2015 the oldest shopping mall in the emirate announced plans to double in size within 12 months, and new outlets opened in a water-front retail complex in the centre of the city. With these developments, the range of brands, food outlets and entertainment centres is growing, and offering more options for the emirate’s consumers.

In terms of contribution to RAK’s GDP, the wholesale, retail and repair services sector was second only to manufacturing in the RAK Department of Economic Development’s (RAK DED’s) 2014 “Statistical Yearbook”. In 2013 it recorded investments worth Dh3.1bn ($843.8m) and accounted for 12.1% of RAK’s GDP. This represented year-on-year growth of 8% from 2012 when it was worth Dh2.9bn ($789.4m), and growth of 59% since 2009. The sector was also the emirate’s second-largest employer, again after manufacturing, accounting for 18.7% of RAK’s workforce.

“The retail sector has become very competitive, and I view this as a healthy thing for consumers and retailers alike,” Ahmad Essa Al Naeem, chairman of Al Naeem Mall, told OBG.

According to RAK DED’s 2014 report, 78% of the outlets providing retail, wholesale and repair services were to be found in RAK City and concentrated in the area from Al Dhait in the south to Shamal in the north on the Al Rams Road. Although there are larger retailers, the main roads through RAK are lined with individual stores, often clustered together according to the services they offer or the products they sell.

The modern retail mall concept, which has been so successful across the UAE and the wider GCC region, only came to RAK in 2000, with the opening of Manar Mall, which is owned by Al Hamra Real Estate Development. The single-storey mall is built over 45,000 sq metres, with a gross leasable area (GLA) of 30,000 sq metres, and has more than 120 units. With a Carrefour supermarket as its main anchor tenant, Manar Mall also hosts Marks & Spencer, Gap, Next, H&M and Nike. According to the Middle East Council of Shopping Centres (MECSC), the mall has a weekly footfall of 154,000. By the third quarter of 2016, Manar Mall is expected to have doubled in size to a GLA of 60,000 sq metres. “We have been inundated by demand from retailers, and it is based on that that we decided to double the size of Manar Mall,” Barry Ebrahimy, group head of commercial property at Al Hamra Real Estate Development Company, told OBG. The Dh230m ($62.6m) contract for the work was awarded to Dubai’s Sun Engineering and Contractors in February 2015.

The other mall owned by Al Hamra Real Estate Development serves the new planned communities that have developed to the south of the city. Spread over two floors, Al Hamra Mall has over 100 stores, a total area of 37,000 sq metres and parking for 650 vehicles. It was opened in April 2010, and according to MECSC, has a weekly footfall of 55,000. Its ground floor anchor store is a Spinneys supermarket, which caters to the residents of both Al Hamra Village and Mina Al Arab, although a 7000-sq-metre Choithrams opened at Mina Al Arab in November 2013. The mall has coffee shops, family restaurants and a food court on the first floor. It also houses a Vox Cinema and a children’s entertainment centre. 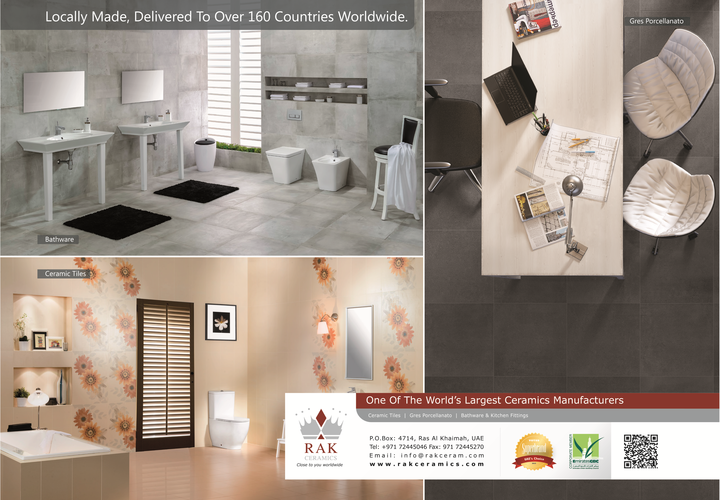 In April 2015 Al Hamra Mall was being reorganised, with 16 first-floor units and 20 units on the ground floor unoccupied out of a total of 185 stores. The owners said that negotiations are taking place with new tenants and that they are confident shoppers will have an improved experience within a few months.

“Al Hamra Mall was completed during an earlier period when the world was entering into the financial crisis, so a lot of space was filled without a proper retail strategy, resulting in there being a lot of one-off shops. So we have taken time to reorganise the mall,” Ebrahimy told OBG. “In some cases we have closed stores down, and in other cases we have relocated them within the mall, so we have more spaces available. However, within the next three to six months we will have some big names coming in. Al Hamra Mall is the only mall in this part of the emirate, and a lot of the customers are affluent residents or tourists.”

In 2008 the owners of Century Mall in Dubai opened a 500,000-sq-metre mall, with a GLA of just under 30,000 sq metres, on Sheikh Rashid bin Said Road on the southern fringes of RAK City. Safeer Mall’s supermarket anchor is a Carrefour and the retail centre also features a Home Centre, Max Retail and Fun City, among others. According to MECSC, Safeer Mall has a weekly footfall of 10,000.

Construction work on Al Naeem Mall was completed in 2009 and it covers a total area of 130,000 sq metres over four floors.

The shopping centre is owned by Project Management and Development Company of Saudi Arabia. This section of RAK City centre is also going through a period of rejuvenation. The RAK Hilton next door to the mall is being refurbished, and is due to reopen as a Hilton Garden Inn in 2016.