The combination of Panamanians’ growing purchasing power and the presence of foreigner visitors eager to spend in upscale boutiques has contributed to the latest boom in the luxury retail sector. The tangible impact of this growth can be seen in the influx of international high-end brands and ongoing investments in the construction of luxury retail space.

The prosperity of Panamanian customers has encouraged upscale brands such as Burberry, Louis Vuitton, Gucci, Fendi and Hermès to enter the local market. Sector research prepared by international real estate consultancy CBRE Panama reveals that the gross leasable area of Class A shopping malls reached 392,407 sq metres in the first half of 2014, while occupancy rates rose from 95.2% in 2013 to 95.5% in 2014. Additionally, the demand for high-end retail space has resulted in higher rents: luxury goods retailers spend on average $44 per sq metre per month for high-end commercial space. This rate is among the highest in Latin America and will continue to rise in the next few years, according to Nikolas Gremler S, general manager of luxury cars retailer AutoStar, which is part of Grupo Kaufmann, the main retailer for Mercedes-Benz in the region.

The most notable project in the high-end retail segment has been the construction of the SOHO Panama Mall complex in the centre of Panama City. The project, undertaken by Westline Enterprises, is worth $360m and its three towers will offer nearly 33,000 sq metres of mall space, as well as just under 86,000 sq metres of office space. Apart from office and residential space, the property will also include the first Ritz-Carlton Hotel in Central America, with 226 rooms, a casino and a luxury shopping centre. The latter constitutes the most innovative part of the whole enterprise, considering that it is the first mall in Panama to exclusively sell high-end brands. The retail space of SOHO Panama will span over four floors and house some 120 luxury clothing, accessories and cosmetics stores. In February 2015 Abdul Waked, president of Grupo Wisa, which owns Westline Enterprises, was named businessman of the year in Panama by Central American magazine El Economista. SOHO Panama’s first offices and malls opened in April 2015, while the other areas, including the Ritz-Carlton Hotel, are scheduled to open in 2016.

Another major project in this retail branch is the expansion of the luxury wing of Multiplaza Mall, the shopping centre that first introduced high-end brands to Panama in 2007. Its upscale retail section doubled in size in 2014, providing space for new stores such as Gucci, Dolce & Gabbana, and Tory Burch, and enlarging existing ones, like Hermès, Cartier and Salvatore Ferragamo.

Apart from fashion brands, high-end motor vehicles is another segment undergoing expansion. According to Gremler, about 2000 cars, or 5% of the total sold in 2014, were luxury models. Grupo Kaufmann itself, present in the Panamanian market since 2010, has experienced rapid growth in sales. Between 2012 and 2013 the number of Mercedes-Benz cars purchased in Panama tripled, reaching 312 units. The growth of the group of potential clients has encouraged the dealer to expand existing offices and showroom, as well as open a new branch in Panama City’s northern business district, home to many high-end properties. The estimated cost of these investments may reach $11m, Gremler told OBG.

Moreover, upper-class consumers in Panama have shown increasing interest in sports cars, which is evidenced by the presence of brands such as Porsche, Lexus and Ferrari, which opened its first local branch at the end of 2014. Apart from domestic clients, Panama has a lot of potential to attract affluent customers from other countries in the region. The availability of a wide range of exclusive brands, Panama’s favourable location and, most importantly, the lowest sales tax rate in the region at 7% may contribute to turning the country into an international destination for luxury shopping in the coming years.

Home to the largest consumer market on the continent, Nigeria offers attractive opportunities for investors and retailers that apply growth strategies tailored to specific consumer preferences and take into account distribution challenges. While macroeconomic headwinds and currency volatility have weighed on consumer spending power in recent years – particularly since the drop in international oil prices in mid-2014 – price sensitivity is leading to new opportunities for smaller packaging, l… 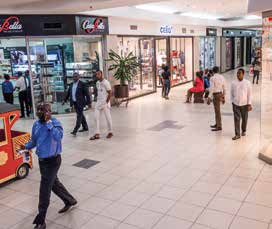