This article also features in The Report: Malaysia 2012. Read more about this report and view purchase options in our online store.

THE LEGAL SYSTEM: Malaysia’s legal system is largely based on the English common law system with some areas of the law having been codified, and with many laws being similar to those found within the Commonwealth. Malaysia has a total of 13 states and three Federal Territories and its land mass is divided into East Malaysia and Peninsular Malaysia. The two states of Sabah and Sarawak and the Federal Territory of Labuan are situated in East Malaysia while the 11 other states and the two federal territories of Kuala Lumpur and Putrajaya are situated in Peninsular Malaysia.

Although the state legislatures have the power to enact specific legislation for their states as provided for in the federal constitution and the state constitutions, if there is a conflict between the state law and the federal law, federal law prevails. Business-related laws are largely the same in Peninsular Malaysia and East Malaysia, with the main differing legislation being land laws. Peninsular Malaysia’s Torrens land law system is governed by the National Land Code 1965, Sabah is governed by the Sabah Land Ordinance and Sarawak is governed by the Sarawak Land Code. Each state in Peninsular Malaysia has its own land rules for, inter alia, its procedures and fees, as well as its own Malay reservation enactments in respect of Malay reserved lands.

RECENT LAWS: There is an increasing trend towards legislating many areas of the law to balance the creation of an attractive business environment with adequate regulatory and other measures for protection of relevant parties. In recent years, the Competition Act 2010, the Personal Data Protection Act 2010, the Price Control and Anti-Profiteering Act 2011, the Construction Industry Payment and Adjudication Act 2012, the Mediation Act 2012, the Minimum Retirement Age Act 2012, the Minimum Wages Order 2012 and the amendments to the Capital Market and Services Act 2007, the Arbitration Act 2005 and the Legal Profession Act 1976 have been passed and have had an impact on the conduct of business in Malaysia.

The recent amendments made to the Capital Markets & Services Act 2007 saw the establishment of a consolidated Capital Market Compensation Fund, which was formed with the idea to boost investor confidence and promote greater retail participation in the capital market. Alongside the establishment of the Compensation Fund, offences and compensation have also been introduced with respect to recommendations on the private retirement scheme. Furthermore, the commission is widening its regulatory ambit over financial advisors to include those who are providing capital market services.

Alongside the drive to improve the business environment, the need for effective and fast resolution of disputes is also being addressed. As the government’s Economic Transformation Programme will have an impact on increased spending on property and infrastructure projects, the recently enacted though not yet in force Construction Industry Payment and Adjudication Act 2012 (CIPA) will assist in addressing the cash flow problems in the construction industry.

The aim of CIPA is to provide for the speedy recovery of payment, quick interim decisions on progress payment disputes and an alternative way to resolve disputes swiftly and cheaply in the form of statutory adjudication. Under CIPA, adjudication is applicable to every construction contract entered into within the private sector, as well as construction contracts by the government. No prior approval of parties is required. The adjudication process does not affect the parties’ rights to refer the dispute to arbitration or litigation in court. In fact, a conflict may be referred concurrently to arbitration or litigation and adjudication in court. Under CIPA, the adjudicator must make a decision within 45 days from the completion of submissions by the parties, failing which the adjudication decision shall be void. As the parties can still challenge the matter or decision by way of arbitration or litigation, the decision is only temporarily binding. However, unless the decision is stayed, the parties must comply with the decision and make payment of the adjudicated amount. CIPA provides remedies in the event that the adjudicated amount is not paid, such as suspension of works, reducing the work rate or securing direct payment from the principal.

The long-awaited Mediation Act 2012, which came into force on August 1, 2012, promotes and encourages mediation as a method of alternative dispute resolution by providing for the process of mediation, thereby facilitating the parties in dispute to settle disputes in a fair, speedy and cost-effective manner. Communications under the Mediation Act made during the mediation process are privileged and not subject to discovery or admissible as evidence in any court proceedings. Mediation under this act can be initiated before commencing any arbitration or litigation in court or even when they have commenced.

Also in line with the preference by large businesses for disputes to be arbitrated rather than litigated in court, the recent amendments to the Arbitration Act 2005 limit the extent to which the courts can intervene in arbitration and allows stay of court proceedings even if the seat of the arbitration is not in Malaysia. The Kuala Lumpur Regional Centre for Arbitration (KLRCA) has introduced the KLRCA Fast Track Rules under which arbitrations can be conducted speedily; the KLRCA i-Arbitration Rules to facilitate arbitrations in relation to disputes arising out of sharia-based commercial agreements; and the Conciliation Rules for parties that wish to amicably settle their disputes by mediation/conciliation.

Separately, the judiciary in Malaysia is also promoting mediation within the courts in Malaysia. To this end, a practice direction on mediation was issued by the Chief Justice. Pursuant to the practice direction, parties can opt for mediation to be conducted by a different judge before the trial of the matter. All disclosures, admissions and communications made in a mediation session are on a “without prejudice” basis which is inadmissible as evidence in court. The amendments to the Legal Profession Act 1976 passed by Parliament in July 2012 will soon see foreign practitioners on Malaysian shores (it is thought that the amendments will come into force in 2013). The liberalisation of the legal profession in Malaysia is primarily to develop Malaysia into an international Islamic financial hub. Subject to certain conditions, the amendments will allow foreign law firms to practise in Malaysia in permitted areas through an international partnership or qualified foreign law firm, and local law firms will also be able to employ foreign lawyers. A selection committee that includes the Malaysian Bar and the Attorney General of Malaysia will make recommendations to the Bar Council for the issuance of the licence to practise. It is anticipated that the permitted practice areas would be limited to transactions regulated by Malaysian law and at least one other national law, or to transactions regulated solely by any law other than Malaysian law.

The Evidence Act 1950 recently saw controversial amendments introduced in section 114A which are said to be aimed at facilitating the proving and identification of an anonymous person involved in publication on the internet. Section 114A, widely criticised as an attempt to stifle freedom of expression, first presumes that until the contrary is proved, “a person whose name, photograph or pseudonym that appears on any publication depicting himself as the owner, host, administrator, editor or sub-editor, or who in any manner facilitates to publish or re-publish the publication is presumed to have published or re-published the contents of the publication”. Secondly, the registered user of a network service is presumed to have published or republished a publication that has been sent from a device connected to that network service. Pursuant to such belief, anyone who has posted defamatory publications through mobile devices or laptops that are connected to the Wi-Fi network would result in the owner of the Wi-Fi network being presumed to be responsible for such publication, until the contrary is proved. 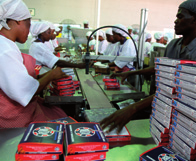