This article also features in The Report: Kenya 2018. Read more about this report and view purchase options in our online store.

The government has a long history of intervening in Kenya’s banking industry. Before the financial sector was fully liberalised in the 1990s, state actors maintained a firm grip on credit allocation to various areas of the economy, only granting a greater share of funds to sectors it deemed to be strategically important. This approach, however, took little account of the ability of these industries to repay their credit facilities. According to the Central Bank of Kenya (CBK), the government’s share of net domestic credit rose from an average of 18% in 1970-74, to approximately 45% in 1990-93. The consequence of this unsustainable trend, which was exacerbated by a tendency towards poor management and unsecured insider lending, was a series of bank failures. A policy which had been introduced with the aim of spurring growth and national development threatened, when implemented, to bring about the opposite. The decision to fully liberalise the market brought the era of state interference to an end for nearly three decades; however, in August 2016 the state stepped in again with the passage of the Kenya Banking (Amendment) Act.

The law, which was implemented in September 2016, prevents interest rates from exceeding the central bank rate (CBR) by more than four percentage points and requires banks to pay interest of at least 70% of the CBR on term deposits. The government’s primary reason for changing the law was to decrease nominal interest rates for loans at commercial banks, which had been creeping upwards in the years prior to the new limit, climbing from a maximum of 16.99% in 2013, to 18.30% in 2015, according to CBK data. To compare, prime lending rates in the developed UK market have run at under 2% for nearly a decade, while in South Africa they have seldom exceeded 10% over the same period. The government’s argument was made more compelling by the fact that in 2015, when lending rates at Kenyan banks were hitting their record high of more than 18%, the central bank’s key interest rate was just over 8%. According to lenders, the wide disparity is necessary to run sustainable and profitable business; however, the cost of borrowing had deflationary effects on economic growth. The government’s approach of imposing a blanket lending rate cap on all loans differs from most jurisdictions, where caps have been limited to certain segments, most often as a consumer protection measure in retail lending.

The legal reform has had unintended consequences that became apparent in 2017. Most significantly, the spread between banks’ lending and deposit rates has decreased dramatically. According to credit ratings agency Fitch, the lending-deposit spread had fallen by an average of 50% by October 2017 – just over a year after the implementation of the new framework. Banks also began limiting the amount of funds they made available to the private sector, as they could no longer price adequately for higher risks. Credit growth had already been slowing since 2015 due to weaker operating conditions and an increase in the number of non-performing loans. By July 2017 private sector credit growth had fallen to 1.2% compared to 7.5% the same period in 2016.

Further commenting on the unintended consequences of the law, David Thuku, CEO and managing director at Family Bank, told OBG, “The interest rate cap has had a negative impact on access to credit, resulting in the opposite of its intended effect”.

Small banks were particularly affected by the new framework, as the niche business models they tend to adopt, characterised by high-risk/high-return lending, were no longer as viable. This meant that Kenya’s small and medium-sized enterprises (SMEs), to which smaller banks have traditionally been more willing to lend than their larger peers, have found it more difficult to access credit over the past year. According to the CBK, the share of SME lending by commercial banks stood at 23.4 % in 2015, but by late 2016 a Kenya Bankers Association survey showed that the sector average had declined to 17%. Shrinking private sector credit growth, particularly to the more exposed SME sector, had the effect of negating a large portion of the macroeconomic benefits coming from the lower cost of borrowing.

From the perspective of the banks, the negative effects of the new framework come in the form of falling interest income from loans and rising funding costs. The sector’s aggregate net interest margin declined from 9.2% in FY 2016 to 8.4% in FY 2017, according to Nairobi-based investment and real estate company Cytonn Investments. This was a contributing factor in a earnings per share growth of -0.8% in FY 2017, against a positive movement of 4.4% the previous year. Data from the CBK shows that while Tier-1 banks managed to maintained high levels of capital build-up, the performance of smaller Tier-3 lenders has been particularly affected, as lower earnings have reduced their ability to build up capital – establishing a cycle of capital erosion and reduced lending capacity. Kenyan lenders have been quick to respond to these twin challenges by redirecting funds, which would have otherwise been earmarked for lending activity, into high-yield Treasury bills, as well as moving customer deposits to transactional accounts, which are not subject to the deposit rate floor. 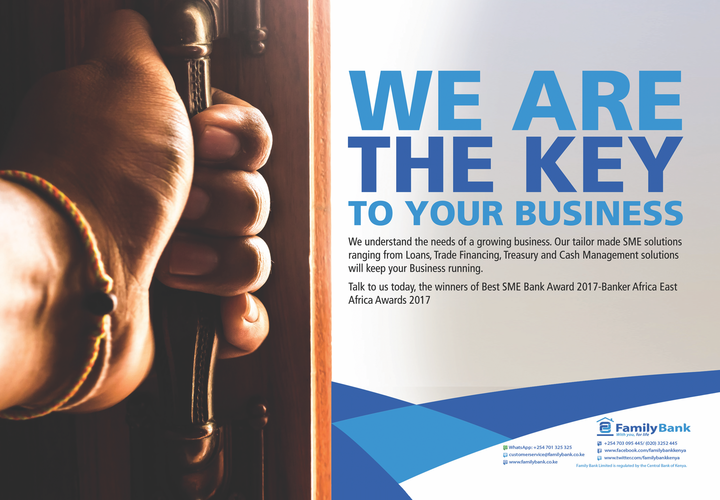 Financial institutions have also responded by seeking out new efficiencies. Institutions have already shifted their strategic focus from the expansion of brick-and-mortar branch networks towards a less costly technology-based approach. According to the CBK, 23 branches closed in 2017, bringing the total number from 1541 in 2016 to 1518 in 2017. Agency banking, mobile money and online banking, however, will continue to provide a platform for business growth over the coming years. A less welcome efficiency drive, however, has targeted employment costs across the sector. According to the CBK’s Economic Survey for 2018, published in April, the number of people employed in Kenya’s financial services sector (which included both the banking and insurance industries) dropped by 2.3% in 2017, from 65,000 to 63,500 people, representing the most precipitous decline in financial services sector employment since the current metric for recording data was introduced in 2011. It was also the reversal of a trend which had seen banking and insurance jobs growing steadily in number, from 48,500 in 2011 to 63,500 in 2016.

According to Cytonn Investments, 11 banks announced plans to downsize in 2016, laying off close to 1620 bank employees. Equity Group made the biggest cuts over the year, reducing its workforce by 400, with Standard Chartered and Barclays following closely, at 301 and 300 layoffs, respectively. In terms of branch closures, Bank of Africa’s decision to shutter 12 of its physical locations was the biggest cost rationalisation effort in the industry, followed by Ecobank’s closure of nine branches.

The CBK has also responded to the legal changes. In a report published in March 2018, the regulator asserted that the limits on lending and deposit rates undermine the independence of the central bank and impair its ability to carry out monetary policy. According to the CBK, the new rate regime, which would normally act as a inducement to lending, has instead resulted in a deceleration of credit growth to the private sector.

A stronger reaction has come from the IMF, which in February 2018 called for the abolishment of the interest rate controls on the grounds that they were stifling lending to the private sector. The following month, during discussions regarding the extension of a $1.5bn precautionary IMF facility for Kenya, the government raised the possibility of a removal of the lending and deposit rate limits. In April 2018 President Uhuru Kenyatta stepped into the debate, acknowledging at a Chatham House event held in London that the government had recognised the “limitations of the law in the way it is currently structured”. He outlined two possible routes, which involved either modifying the regulation or repealing it altogether as a means to deal with some of the issues and the concerns that had been brought up. However, as of August 2018, legislators had decided to maintain the cap until further notice.

That said, the challenges of how to lower the cost of lending and increase credit extension to a broader array of individuals and companies remains. One possible answer would be to strengthen the corporate environment. This would permit commercial banks to lend more freely without increasing risks. In practical terms, the solution will require a holistic approach, covering areas from SME bookkeeping to corporate dispute resolution – all of which are long-term undertakings rather than quick fixes.