This article also features in The Report: Djibouti 2016. Read more about this report and view purchase options in our online store.

Djibouti’s banking sector, which was a duopoly until as recently as 2006, has seen a wave of development in recent years, and the scope for further growth is significant. Recent years have seen lending rise exponentially as new players have entered an increasingly well regulated market: credit allocated to the private sector grew from 20% of GDP in 2005 to 29.5% of GDP in 2015, according to data issued by the Central Bank of Djibouti. As the wider economy continues to expand, the question of which areas of the aggregate loan book will grow the quickest continues to exercise the industry. While the nascent state of the sector means that opportunities exist across a wide array of segments, it is the extreme ends of the credit spectrum that have attracted the most attention of late.

The prospects for big-ticket lending have in large part been buoyed by a government drive to develop the nation’s infrastructure and port facilities in a bid to ramp up economic growth over the coming years. According to the IMF, aggregate investment reached 44% of GDP in 2014 and is expected to come in at 57% in 2016. The IMF posits a similarly favourable growth in GDP for the country, which it expects to stand at around 6.5% per year for 2015-16, rising to 7% for 2017–19.

The corporate loan books of Djibouti’s banks stand to benefit from this anticipated increase in economic activity, and a recent addition to the market highlights the favourable view of the industry regarding large-scale lending prospects. The opening of the Commercial Bank of Djibouti (CBD) in May 2015 as the nation’s first bank with an explicit mandate to provide banking facilities to companies and projects is well timed to capitalise on Djibout’s economic expansion and represents a significant milestone in the evolution of the banking industry.

The lender announced plans for a large sovereign operation, providing funding to the government for the large projects slated for development within the country, as well as offering a platform to the government for its more general banking needs. Corporate banking is also a major focus of the new institution, which aims to pursue growth prospects in areas of credit extension, trade finance services and attracting deposits from the country’s cash-rich smaller firms. Beyond its core financing operations, the bank offers advisory services to local and foreign corporates intending to invest in the country, addressing areas such as investment potential, fundraising and capital formation, and corporate requirements.

The CBD’s entry to the market places it in competition with the sector’s two large traditional players: Bank of Africa in Mer Rouge (BOA-Mer Rouge) and Banque pour le Commerce et l’Industrie – Mer Rouge (BCI-MR), which between them accounted for 95% of customer deposits and 80% of domestic lending in 2012, according to the World Trade Organisation. Both institutions have announced plans to expand their own corporate and project financing operations, according to local press reports. In 2015, BOA-Mer stated that it intends to strengthen its presence in the corporate market, while BCI-MR has built up a strong corporate business specialising in trade finance, including import and export credit, foreign exchange transactions and international guarantees.

However, while much of the headline attention in the banking sector – and the economy as a whole – has been concentrated on big-ticket activities, there is also potential for significant growth at the other end of the lending spectrum. This is a result of the fact that country has a sizeable unbanked population, which historically has little interaction with the country’s financial institutions. 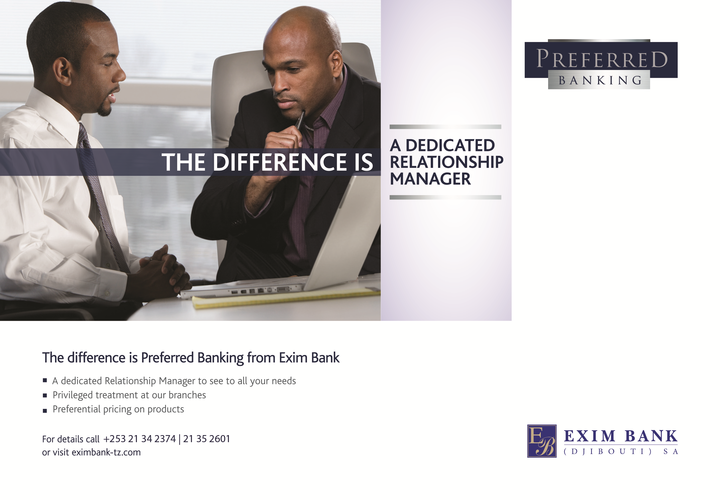 According to the World Bank, Djibouti has one of the lowest levels of financial inclusion in the MENA region. Just 12% of the working age population have a bank account, and this number falls below 5% for the 15- to 24-year-old category. The potential for micro-lending in the Djibouti market, both by conventional banks and dedicated microfinance companies, is therefore significant. In nearby markets some of the bigger banking players, such as the National Bank of Egypt or Equity Bank in Kenya, have moved into the micro-loan segment as a means to encourage formalisation amongst smaller businesses. Under this model, a small and medium-sized enterprise is granted a micro-loan on the basis of relaxed lending criteria, which is gradually tightened as the business grows and the financing proceeds through successive renewals. The expansion of microfinancing in Djibouti faces numerous challenges, according to the findings of a 2015 World Bank report. These include a lack of administrative capacity; limited participation by rural youth and vulnerable populations due to factors such as geographic distances and the guarantee and interest rate requirements set by current regulations; and the limited range of financial products available to customers, many of which are not sufficiently adapted to the needs exhibited within the market.

However, this does pave the way for higher potential short-term growth for those lenders able to tap into it, a result of pent up demand for microfinance which has not been met by formal institutions. Currently, the credit needs of the unbanked population have been met to some degree by informal “tontines”, a system developed in 17th-century France whereby a number of investors pay a sum into a pool from which they receive annual dividends on the capital invested.

The situation is clearly less than ideal from a regulatory point of view: tontine schemes operate with no official oversight and have been banned in a number of countries due to the fact that they create a financial interest in the reduced lifespan of a fellow subscriber. As a result, providing a formal alternative to such practices has become a priority for the central bank, a stance which has been welcomed by the IMF.

The anticipated growth of the fledging microfinance segment starts from a small base: the national microfinance organisation, Caisse Populaire d’Epargne et de Crédit, a network of three sub-national financial cooperatives created in 2011 as a result of a merger of previous microfinance providers, has an estimated 15,000 member clients (or 3% of the adult population), according to the World Bank. The reorganisation of the sector has been the government’s most significant intervention in the microfinance industry to date, but it has also sought to boost the industry through capital injections via the National Solidarity Fund. The strong prospects for continued lending growth in the Djibouti market bode well for local businesses and individuals, which at present enjoy only limited access to credit. Challenges clearly remain. Globally, Djibouti stands at 181 in the ranking of 189 economies on the ease of gaining access to credit, according to the World Bank.