This article also features in The Report: Colombia 2019. Read more about this report and view purchase options in our online store.

With no major onshore oil discoveries since 2009, Colombia’s oil and gas reserves have dwindled. The country has thus turned to non-conventional deposits as a means to boost production in the medium to long term. While this segment has historically been dominated by offshore activity, the government’s aim to boost proven reserves, diversify its sources and ensure long-term self-sufficiency has given the fracking industry ample opportunity to expand.

The government estimates that fracking activities could triple proven oil reserves; however, resistance from local communities and environmental groups has dampened the industry’s progress. While preliminary results appear positive, whether these policies can be sustained over time remains to be seen.

Colombia’s offshore ambitions began in 1969, with Chuchupa, the first find, occurring in the northern region of La Guajira in 1973. This field, operated by Chevron, is the only offshore project currently in operation. The offshore segment saw little activity in the intervening years, until the National Hydrocarbons Agency (Agencia Nacional de Hidrocarburos, ANH) issued six blocks in 2012 and five blocks in 2014. These were awarded to companies like Shell, Repsol, Ecopetrol, Anadarko, ExxonMobil and Statoil. This cleared the path for the introduction of more favourable fiscal conditions, such as cutting royalty fees by 40% and decreasing windfall tax on profits.

In September 2016 the Ministry of Mines and Energy announced that offshore projects would be considered free trade zones, allowing operators to bring in the supplies and services necessary for the development of project without passing Customs. These changes provided operators with incentive to begin operations, which in 2014 led to a large offshore find at Brazilian national oil firm Petrobras’ Orca-1 well in the Tayrona Block, 40 km off the coast of La Guajira. According to state-owned Ecopetrol’s CEO, the gas extracted from the field could potentially be exploited by 2023. In 2015 US firm Anadarko Petroleum discovered 39.6 to 70.1 metres of net natural gas pay at its Kronos-1 well in the Fuerte Sur Block-53, at depths of over 1500 metres. In February 2017 the offshore specialist drilled the Gorgon-1 well in its Purple Angel block, at a depth of 1835 metres. The well revealed a gas column which was the largest find of its kind in Colombian history.

While these discoveries are promising, production at the Gorgon field may not begin until 2025. However, the proximity between confirmed gas fields could open the possibility for the development of a specialised gas cluster, effectively allowing for the sharing of infrastructure, thus improving profitability and efficiency. The existing infrastructure that has been developed by Chevron over the last decades in order to service its Chuchupa and Ballena fields could serve as a base for the future development of additional offshore projects.

Colombia’s offshore prospects look positive, with the ANH estimating potential reserves in the Caribbean waters to be close to 9bn barrels, with an additional 3bn barrels in the unexplored Pacific Basin. However, the industry began to lose momentum in 2018 as security issues arose in other parts of the country. These problems were exacerbated by upcoming elections and increased instability in neighbouring Venezuela.

The election of a pro-business government in 2018 re-established some of the sector’s optimism. In February 2019 the ANH announced a series of reforms to rules regarding its exploration and production (E&P) contracts, including the designation of an arbitration tribunal to respond to disputes over offshore projects. Additionally, the reforms include the chance for operators to extend contracts and the option for Colombia to increase its participation in offshore projects by 5% when extensions are requested. The change could see as many as nine existing offshore technical evaluation agreements (TEAs) – owned by ExxonMobil, Shell, Ecopetrol and Anadarko – be converted into E&P contracts. At the same time, the ANH issued 20 new blocks for E&P in early 2019 within its newly passed permanent process for area allocation, including two offshore blocks (see overview).

Following the overhaul of the country’s regulations on E&P contracts, a number of deals were signed on onshore and offshore fields that have allowed for the arrival of new players in the latter segment. Days after the ANH and Shell signed E&P contracts for two of its blocks under TEAs COL-3 and GUA OFF-3, Houston-based Noble Energy acquired a 40% stake in Shell’s offshore blocks and gained operational control, following approval from the ANH.

Under the terms negotiated with the ANH, the first phase of the projects include minimum exploratory programmes (planificación espacial marina, PEMs), which entail investment of over $100m across the two blocks. If both PEMs are fully developed, commitment to these projects should exceed $650m. Following this, the ANH and Spanish company Repsol signed two E&P contracts with ExxonMobil and Ecopetrol for the exploration of two blocks. Participation in the COL-4 block, located 100 km off the coast of Bolívar, will now be shared between Repsol and ExxonMobil, while the GUA OFF-1 block, 78 km off the coast of La Guajira, will be split between Repsol and Ecopetrol. The Spanish company will maintain its role as operator in both cases, and the two contracts should result in a combined investment of up to $700m.

After signing an E&P contract for offshore block COL-5, Ecopetrol now has a hand in five offshore blocks in the Caribbean, along with Fuerte Sur, Purple Angel, Tayrona and RC12. This follows claims by Ecopetrol that, together with its partner Petrobras, it will be reactivating its efforts on the Tayrona block, given improvements in contractual conditions granted by the government. The programme is expected to result in an approximately $140m in investment and the drilling of two more wells before 2022. This is in addition to the company’s ambitions to expand outside Colombia’s borders. It already owns shares in various offshore blocks throughout Mexico and Brazil.

While the debate over fracking is not new, a recent report, issued by a 13-person panel of experts across the industry and related academia, has given the green light to begin evaluating prospects. Developed as a guideline for whether or not the country should engage in fracking activities, the document recommends the implementation of one or more integral research pilot projects (proyectos pilotos de investigación integral, PPIIs). These should generate knowledge and scientific evidence that will help make informed decisions on the commercial production of hydrocarbons. Implementation of PPIIs will respond to a number of requisites addressing matters concerning transparency, management guidelines, prior consultation with communities, strengthening institutional capacity and regulatory oversight, as well as ensuring environmental protection and water conservation.

While the law covers the exploration phase of non-conventional sources, no regulation yet exists with regards to production stages. In addition, a number of advocacy organisations have highlighted the contradictory nature of the report, namely that despite recognising the numerous risks associated with these activities, it still gave them the go-ahead.

María Fernanda Suárez, minister of mining and energy, told international media that Colombia could increase its oil and gas reserves through the use of fracking from 5.7 years for crude and 11 years for gas, to 15 and 30 years, respectively. She stated that ExxonMobil, Conoco Phillips, Parex and Ecopetrol are among those interested in initiating fracking operations. A number of basins offer strong prospects for potential fracking, including Valle Medio del Magdalena, Valle Superior del Magdalena, Caguán-Putumayo, Catatumbo, Cordillera Oriental, Cesar-Ranchería, La Guajira and Llanos Orientales. Once it receives environmental approval from the National Authority for Enviromental Licences, the first pilot project will be developed by Ecopetrol in Valle Medio del Magdalena. It is expected to set the stage for the future application of this technology. Ecopetrol announced that it will invest $500m in the exploration of non-conventional deposits between 2019 and 2021, and establish a Directorate of Non-conventional Hydrocarbons within its corporate structure to direct its intentions in the field.

While the new government sees the development of its hydrocarbons potential as paramount to the country’s development and energy self-sufficiency, opposition from local communities and environmentalists is ongoing. A lack of trust in the government, local communities’ perception of insufficient norms and regulations, and oversight from local and regional environmental agencies act as roadblocks to the development of extractive industries. While recent favourable decisions by the constitutional courts provide an additional impetus for operators seeking to develop activities in the sector (see overview), the country’s history in dealing with regional authorities remains a risk for those seeking to enter the sector.

Report: What investments is Colombia making to digitalise its economy?

Digital acceleration trends are transforming the global economy. Along with a need to diversify exports away from oil, Colombia is investing in technology and digital solutions to boost productivity and competitiveness. 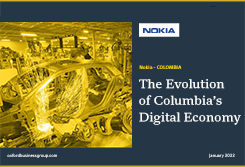