This article also features in The Report: Argentina 2018. Read more about this report and view purchase options in our online store.

The Argentine health care system is divided into three subsectors. The public sector assists both those citizens without health insurance, mainly from low-income backgrounds, and includes public hospital provision while also providing health plans for retirees and government employees at a national and provincial level, including the military and police. A second sector is run by trade unions for workers in a given sector, both public and private, and lastly there is the private health insurance system. Under this model the management of the health care system is delegated to the provincial level.

The partitioning of the system has two major consequences. The first is a lack of coordination between health care units operating on outdated protocols. Waiting times for surgery are long in the public sector, a situation aggravated by the decision of some private health care users to have expensive procedures on the public system to avoid high premiums. Second, there is a wide disparity in the quality of treatment available in major cities compared to rural areas.

There is a disparity between the quality of service available in Buenos Aires and in the north-west of the country, where much of the hospital infrastructure is over 50 years old. One step to improve this is the certification of health care facilities to bring them up to standard. In addition, the government intends to merge service delivery to provide universal coverage.

While wealthy patients falling sick in Buenos Aires can expect treatment in some of the best hospitals in the Americas, the varying quality of the nation’s facilities means that it is not a top performer in the Pan American Health Organisation’s key health indicators. According to the latest available data from 2017, in 2015 Argentina’s life expectancy at birth was 76.7 years, slightly above the Latin American average of 75.8, but below those of its regional neighbours Chile (79.7) and Uruguay (77.6). The same goes for infant mortality, where the local rate of 9.7 deaths per 100,000 live births is well below the regional average of 32.3, but weaker compared to Chile’s rate of 6.9. The country also has a high incidence of non-communicable diseases, with a mortality rate of 434.9 per 100,000 members of the population. Of these, mortality rates for ischaemic heart diseases (39), cerebrovascular diseases (37.4), breast cancer (20.7) and lung cancer (19.5) are among the biggest killers.

Since the turn of the millennium Argentina’s health care spending has marginally increased, with total health care expenditure equivalent to 6.8% of GDP in 2015, rising from 5% in 2000, according to the latest available data from the World Bank. In 2015 the country spent $998 per capita on health care. These figures are still behind those of some of the country’s regional neighbours such as Chile, however, with total health care spending equivalent to 8.1% of GDP in 2015, and $1102 per capita. However, the country scores well in several other areas, registering 3.2 doctors per 1000 people, a rate that surpasses that of many developed countries, and 4.7 hospital beds per 1000, the highest rate of any Latin American nation.

In August 2016 the government took steps to remedy the system’s inefficiencies by introducing the Universal Health Plan (Plan Universal de Salud, PUS). Targeting the 15m Argentines currently in the public system, the PUS looked to make simple but effective changes. Measures introduced by the initiative include patient identification cards and the storage of patient health records on a national database. Outdated reimbursement systems for disabled patients, a major source of delays, will be replaced with a direct payment system, along with the introduction of a telephone appointment system.

In addition, a new body is expected to be operational in 2019, the National Agency for Evaluation of Health Technologies, which is aimed at improving the public sector’s ability to identify the most effective drugs and ensure their fair pricing. By creating an open and universal system that eliminates the need for approvals and authorisations, the Ministry of Health hopes to reduce spending on litigation cases. Lastly, the PUS included a much needed cash injection into the health care system, with AR2.7bn ($139.8m) going to the Solidarity Redistribution Fund, AR8bn ($414.2m) to universal health care and AR4.5bn ($233m) to accident and emergency.

While Buenos Aires is the most attractive market for new health care infrastructure projects, it is in the provinces that investment is most needed. One way the government is hoping to achieve this is by attracting new public-private partnerships (PPPs). In November 2017 President Mauricio Macri announced that new hospital projects would be part of government plans to attract $26.5bn worth of PPPs by 2022, with an expected 60 projects likely to go out to tender, although exact details of projects in the health sector had not been released as of August 2018.

The depreciation of the Argentine peso in recent years has led to a reduction in the size of the local pharmaceuticals market in dollar terms, despite its continued growth. In 2013 the Economist Intelligence Unit estimated the market to be worth $6.6bn. However, data from the National Institute of Statistics and Censuses registered total drugs sales at AR97.3bn ($5bn) in 2017, up 26.9% from the previous year. Pharmaceutical products must receive a licence from regulatory body the National Association of Medicines, Foods and Medical Technology, a process that can take between six and 24 months, according to the US International Trade Administration.

Imported goods from outside regional trading bloc Mercosur are subject to an average tariff of 14%. By comparison, the medical devices market is dominated by imports, which make up approximately three quarters of the $820m market, reaching $568m in 2015.

High-end products are most in-demand, and the US supplies over a quarter of imported medical devices, although Brazilian manufacturers, benefitting from tariff-less trade also present strong competition for Argentina. Between 2014 and 2016 the strongest growth in demand, in value terms, came from massage and respiration equipment, which increased 9%; CT scanners and X-ray machines, up 3%; and orthopaedic related equipment, which rose 1.5%.

Both the biggest challenges and opportunities for the sector come in the field of innovation, however. In May 2012 new intellectual property legislation was introduced with the effect of rejecting patents for products that made only marginal improvements on existing drugs. In the late 2000s pharmaceutical companies considered Argentina an attractive market for product development, but the 2012 legislation made it difficult for new drugs to pass the criteria for a patent. In order to allow innovative technologies to be developed more freely, the government may need to ease the regulatory framework.

That said, the high quality of human resources in Argentina makes the country an ideal base for companies to establish research centres, according to Rodolfo Civale, general manager of GlaxoSmithKline’s Argentina facilities. “Each year the country’s universities graduate thousands of well prepared students in the fields of medicine, pharmacy and life sciences,” he told OBG. “This makes Argentina an ideal base for the development of new pharmaceutical products, undertaking clinical trials for the regional market and innovative growth areas such as biotechnology.”

With the introduction of the PUS, President Macri’s government has gone some way to addressing the low-hanging fruit with regard to improving Argentina’s health care system. Inefficiencies and bureaucratic blocks in the sector can be improved by the introduction of new technologies, appointment scheduling systems and the harmonisation of data across the fragmented model.

The unification of health care provision looks set to continue, but the biggest challenge will be to provide quality treatment to provinces in the country’s more remote areas. In parallel, and in order to achieve these objectives, Argentina awaits a single long-term health care development plan, and a PPP framework for new hospitals and clinics in order to attract investors.

The mining, agriculture and financial services sectors are essential pillars of GDP, and are fundamental to Peru's socio-economic development and exports. 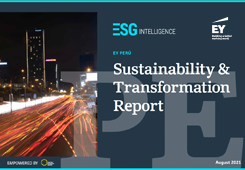 In terms of the filing of international patents, 2021 was a record-breaking year, with higher education playing a significant role in driving innovation and expanding intellectual property (IP). According to the UN World Intellectual Property Organisation (WIPO), 277,500 international patents were filed in 2021, a 0.9% increase from 2020 and representing the 12th consecutive year of growth. Revealingly, the largest share of patents was in the field of computer technology, at 9.9%,…