This article also features in New Tourism Markets. Read more about this report and view purchase options in our online store.

More from Bahamas
Economic Update
Both the private sector and the state are preparing for the challenge of falling visitor numbers, as tourism in the Bahamas copes with the impact of the global economic downturn.

Tourism is one of the engines of the Bahamas’ economy, with more than 50% of the country’s workforce employed either directly or indirectly in the sector, and the industry accounting for around 60% of Gross Domestic Product (GDP), according to the US State Department.

In early October, the IMF revised its estimates for growth in the Bahamas, projecting a figure of 1% GDP expansion in 2008 and 1.2% in 2009, compared to previous figures of 4% in 2008 and 3.9% for next year. One of the main factors behind this correction was expected falls in tourism revenues.

The Bahamas’ tourism industry was already experiencing difficulties even before the full effects of the international economic crisis began to take hold. Last year, overseas arrival numbers fell to 4.6m, a drop of 3.4% over the 2006 total. Tourist arrivals through to July have decreased by 3.2% compared to last year, with the key seaborne tourism trade falling by 5.9%, according to the Tourism Ministry.

Due to the current economic crisis, many Americans may be reluctant to take trips to vacation destinations like the Bahamas, according to Larry Gibson, vice-president of Colonial Group International. With the country’s economy strongly dependent on tourism, along with the financial services sector, the Bahamas will face tremendous challenges, Gibson said.

“For the next 12 to 18 months, we can really… expect a slowing down in our economy,” Gibson told the local press on October 29. “We can see signs of that now, especially when you look at the number of businesses catering to tourists that are closing down, including restaurants and hotels who are feeling the pinch.”

On the bright side, with the cost of travel on the rise, many in the industry are predicting that large numbers of Bahamians who traditionally go to the US during the holiday season – particularly Miami or Fort Lauderdale – will stay at home.

“Bahamians who may have gone to Florida despite their own reduced circumstances may now have no choice but to cancel plans, given a general increase in fares,” Diana Wallace, manager of the Destinations agency told local media on October 31. “I think it means that local retailers can count on seeing an increase in the number of shoppers doing their shopping here as opposed to South Florida.”

At least one local company is already seeking to cash in on the crisis, with Grand Bahama Nature Tours trying to gear daily adventure tours for the domestic market through offering special rates to locals. Manager Erika Gates told the local press that her company sees the benefits of domestic business, as it helps to provide a local market base when international visitor numbers are down.

The government is looking to play its part both by encouraging domestic tourism and trying to open up new markets for the industry.

Next month, Tourism Minister Vincent Vanderpool-Wallace will travel to China as part of a programme to generate interest in markets outside the US. His trip follows the appointment of the Bahamas’ first resident ambassador to China in August of this year.

“He’s going to Beijing and Shanghai, and the intent really is to have him meet with and speak to tour operators, airlines and the media to begin to stimulate that market for us,” Vernice Walkine, director general of the Tourism and Aviation Ministry, told local media.

Additionally, the Ministry is about to launch a multimedia promotional campaign in Europe, particularly targeting the UK market, although Walkine acknowledged that Europeans are also feeling the pinch of the global economic slowdown.

In this year’s budget, released in mid-June, the Tourism and Aviation Ministry saw its allocation increased by 11.3% to a record $91m – nearly $30m of which will fund promotional activities in North America, the UK and Europe. By boosting spending and seeking to widen the pool of potential visitors, the government hopes to see the tourism industry through the present hard times.

Report: How has public-private collaboration boosted digital and cash transformation in the Bahamas?

Public-private collaboration aimed at boosting digital payments and reducing cash usage in the Bahamas has made gains in a relatively short timeframe. 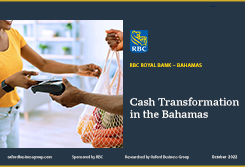