This article also features in Ghana: Year in Review 2012. Read more about this report and view purchase options in our online store.

With the presidential elections largely concluded, save a few outstanding legal challenges, 2012 proved to be a year in which Ghana gave a comparatively strong economic performance, bolstered by stable commodity prices, continued oil production and a sizable capital campaign in both the gas and electricity sectors. However, structural weaknesses will need to be addressed by the new administration if the country is to maintain its upward trajectory.

Exports grew over the course of 2012, dominated by the traditional commodities of gold and cocoa, which together make up almost two-thirds of total revenues. With the oil industry’s contribution now added in, roughly 80% of Ghana’s exports come from raw commodities. Rising imports, buoyed in part by growing domestic consumption, have helped widen the current account deficit.

Although year-end figures have yet to be tallied, the cedi depreciated by approximately 14% against the dollar over the course of the year as a result of increased domestic demand for imported goods and equipment. Ghana’s impressive growth also increased inflationary pressures for the short-term, although the consumer price index fell for a third consecutive month in December, ending 2012 at 8.8%, down from 9.3% in November.

In a statement, the Ministry of Finance and Economic Planning announced that Ghana recorded its 31st consecutive month of single-digit-rate inflation in December 2012, saying, “…the declining inflation has created a conducive environment for businesses to plan on a long-term basis, thereby enhancing the business investment, which has helped put the economy on a higher growth path”.

The past 12 months have seen the country racing to finalise infrastructure for its gas master plan, which will pump gas from associated deposits in the Jubilee Field to processing facilities and power plants on shore. Some $750m worth of infrastructure is being built by China’s SINOPEC as part of a broader $3bn financing package in a bid to leverage the country’s extensive gas reserves for domestic generation.

The infrastructure is also needed to alleviate pressure on oil production in the Jubilee Field, which stands to suffer if the current process of reinjection continues. According to local press, gas will begin to flow to the newly built Aboadze power plant by February 2013. The finalisation of the infrastructure will come at a crucial time for Ghana, which suffered from shortages last year.

Oil production in Ghana, which began in December 2010, is expected to continue to make a major contribution to GDP as international firms expand their operations in the country. Oil revenues rose 29% in the first nine months of 2012 on the back of increased production at the offshore Jubilee field. Production reached an average of 85,000 barrels per day (bpd), rising to 110,000 bpd by December, local media reported. Income from the field reached $434m in September, up $338m year-on-year (y-o-y), while total output hit 18.6m barrels, up from 17.6m for the same period in 2011.

Ghana also plans to build a $10m school for petroleum studies this year, funded in part by the African Development Bank, which will help to develop management and operational strategies.

While oil and gas dominated the headlines, traditional commodities continued to play a central role in fuelling growth and revenues in 2012. Cocoa, which indirectly supports about 17% of the population and represents 11.5% of agricultural GDP, had a fairly successful year, although a combination of dry weather and lower prices is expected to signal a drop in production on 2011. The August 2012 edition of the Quarterly Bulletin of Cocoa Statistics forecasts Ghana’s production at 860,000 tonnes for 2011/12, down from 1.02m tonnes the previous year.

Mining, which comprises roughly 40% of exports, grew in double-digit figures over most of 2012, due primarily to increased revenues from gold production. While production fell slightly last year, higher prices kept revenues afloat and have also helped fund new prospecting operations in more marginal deposits. The government is working to encourage this in a bid to open up more production in the largely unexplored north of the country, and the Volta basin. Planned new tenders will be conducted under a revamped bidding system and any recipients of new licenses will need to meet more onerous fiscal terms.

The continued centrality of commodities in Ghana’s growth, however, is a concern for policymakers, particularly as they look to improve the sustainability of development. The high rate of underdevelopment in more rural northern regions, where poverty rates reach well above 50% in some areas, will require a boost in labour-intensive sectors.

Overall, after an equally impressive 2011, Ghana’s broader indicators for 2012 have been very encouraging, and 2013 appears set to continue the trend, with robust commodity-driven growth of 7.8%. With gas infrastructure in place and increased activity in cocoa and gold, revenues should remain fairly strong, although more will need to be done to help ensure the sustainability of Ghana’s development and improve job creation. 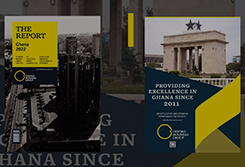